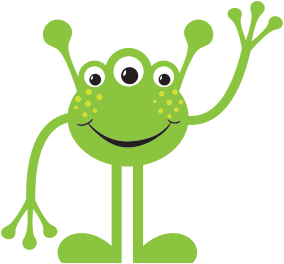 This is Blublubox, a friendly alien from the planet BleBeep who is visiting the Earth. Blublubox is interested in hearing about our number system. His planet uses a number system with only six digits because his people only have six fingers, so it's quite different from our own. He really wants to hear what we do with parts of numbers.

Blublubox, this is the number "thirty-two and seven tenths", written as a decimal number. Do you notice that we have tens, ones, and tenths places? The tenths are numbers smaller than a whole number, and we put a dot, called a decimal point in between the ones place and the tenths place. 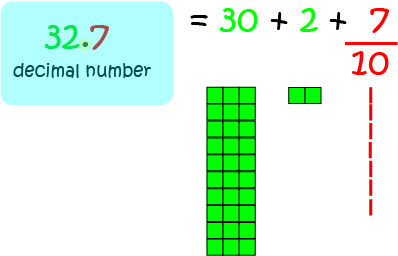 We always know what number a numeral represents because our decimal number system uses place value. Each column of a number stands for a power of \(10\). The position of a digit in a numeral is very important. 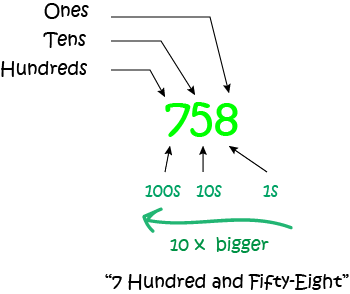 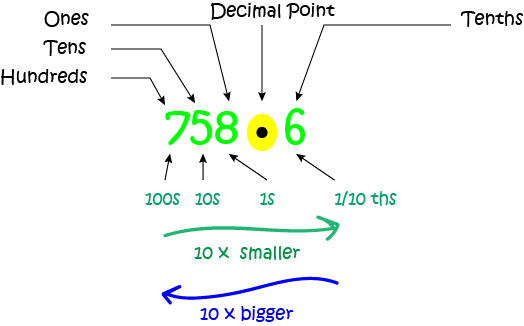 Of course, we can continue on to the right, making columns that stand for smaller and smaller values for as long as we like. We can include tenths, hundredths, thousandths, ten thousandths and so on. Each column is ten times smaller than the column immediately to the left of it. Here's an example:

Decimal Numbers can be Very Large or Very Small

The decimal number system we use here on Earth lets us write numbers that are as large or as small as we like, Blublubox. To make a bigger number, we simply add more columns on the left. Each column is ten times bigger than the column immediately to its right. To make a smaller number, we add more columns after the decimal point. Each column is ten times smaller than the column immediately to its left. 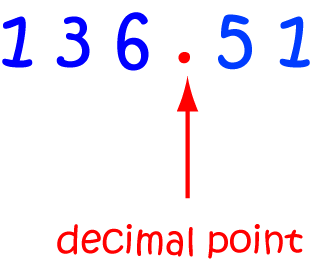 Blublubox, when we write down a decimal number, we really mustn't forget the decimal point. It is very important as it tells us exactly where the ones digit is (immediately to its left). If we don't have a decimal point, we just have to assume that we are dealing with a whole number. Sometimes people use the word "decimal number" to refer to any number in our number system, but we usually use it to mean a number with a decimal point in it.

Different people have different ways of thinking about decimal numbers including:

So, Blublubox, there are at least three different ways that people can think of decimal numbers. All of them are equally good. It just depends on what makes the most sense to you.