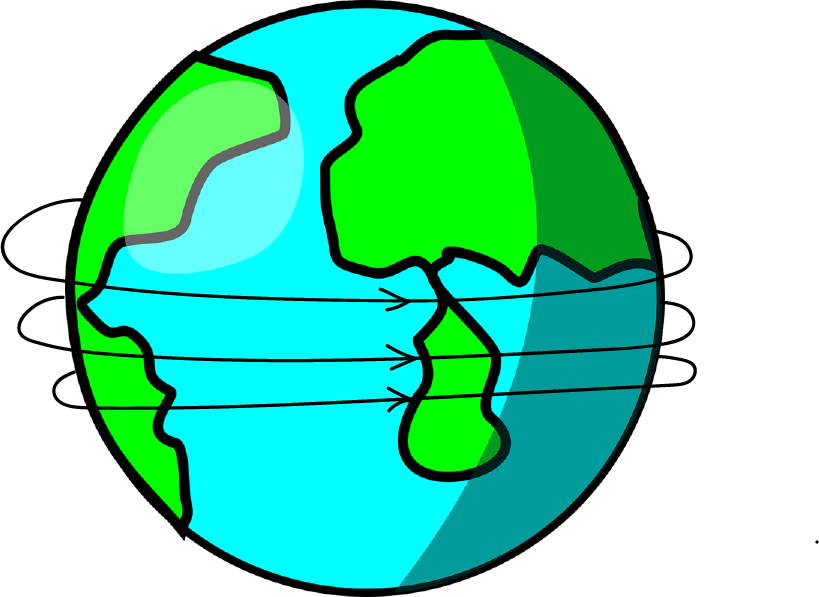 A day is the length of time it takes the Earth to make a full turn on its axis.

As the Earth spins around, some parts of the planet face the Sun, while others face away from the Sun.

If you look at the picture of the Earth, you will see that some parts of it are lighter than others.

Hours in a Day

Each day is broken up into \(24\) hours, beginning and ending at \(12\) midnight. We use these hours to measure the time.

The \(12\) hour clock is probably what you are most used to. A day is split up into two halves, with midday (\(12\) noon) in the middle. We write AM (an abbreviation of a Latin phrase meaning "before midday") after the times from \(12\) midnight until just before \(12\) noon, and PM (an abbreviation of a Latin phrase meaning "after midday") for the times from \(12\) midday up until just before \(12\) midnight.

The \(24\) hour clock is commonly used in Europe, and by the army, navy and air force.

For now, let's just stick to the \(12\) hour clock, and have a look at a typical day in the life of Alice the cow.

A Day in the Life of Alice the Cow

How do your days compare to Alice's days?

Christo's day is a little bit different from Alice's. Here's what he does each day:

The days of the week have different names. They are:

Did you know that the days are named after mythological figures?