Addition is a way of joining two or more numbers (or groups of things) together to make a bigger number (or group), which we call the total.

In this example we join two groups of two balls together to make a new group of four balls.

We write this in numerals as:

And say it in words as:

Is it time for another example? This time we're going to join one group of three balls to another group of five balls:

In words, this says "three plus five equals eight".

It doesn't matter which group you put down first when you're doing addition:

Let's look at some other examples:

To get good at addition, the best thing you can do is to get lots of practice.

Try making up some sums yourself. This is a fantastic use for brussels sprouts. Divide your brussels sprouts into groups, and add them together. Check that it doesn't matter which group you put first.

If you get in trouble for treating brussels sprouts that way, there are plenty of other things you can practise with: shells, coins, stones from the garden...just about anything you can think of.

There are lots of strategies for adding small and larger numbers in the article about tips and tricks for addition.

Let's just look at a few of them here.

Tables are really useful when you want to add smaller numbers (you have to make them too big if you want to use them to add larger numbers). 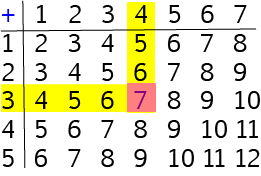 Addition in Columns for Larger Numbers

To add larger numbers together, we write them down in columns. The hundreds, tens and ones places (and so on) of each number form the columns.

We then add each column separately. It's a good idea to add the ones column first, then the tens, then the ones, etc.

Sometimes one of the columns will spill over into the higher column, and then you'll need to adjust the total of the next column to the left.

There's an article on addition in columns that will give you more information about this method of adding larger numbers.

Naming the Parts of an Addition Sum

People use lots of different names for addition, or to tell you that you need to add numbers. Some words you might see are sum,plus,increase and total.

We call the numbers that we add together the addends and the result of the addition the sum or total: