Integration has all sorts of useful applications. For example, you might have been given a function definition that tells you how quickly students come up with excuses to avoid doing extra homework and want to work out the total number of excuses that have been made in the past 5 days. Integration will help you out here as it gives you a way to find the area under the 'rate of making excuses' curve between day 0 and day 5:
\(\displaystyle{\text{Total Excuses} = \int_0^5 \frac{d\text{Excuse}}{dt} \; dt}\).
This area represents the total number of excuses made over these 5 days.

Other applications might include finding volumes of solids, areas under more usual graphs like the one in the picture (no you don't really have to cut the area up into little squares and count them), lengths of arcs, velocities of objects whose acceleration functions have been given, distances travelled, and centres of mass. Physicists really know how to exploit a good integral! 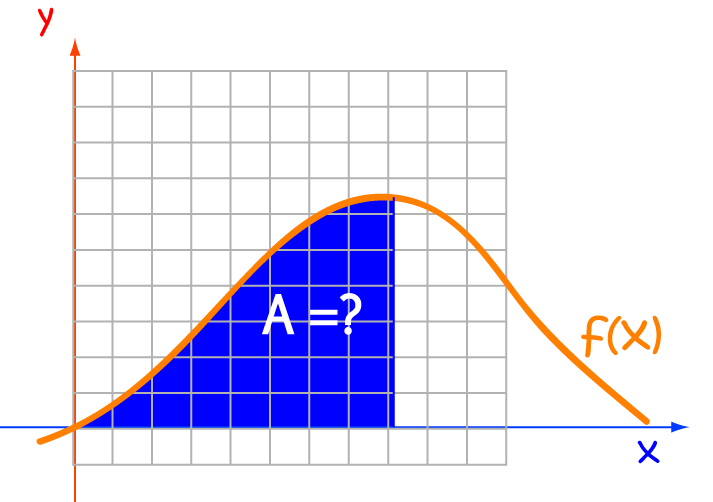 So that you don't have to continually calculate integrals using limits of sums of shapes that you can fit under, or over (or around) the curve, there's a list of integrals of common functions that you can look up. There are also rules that can help you to calculate the antiderivatives of wonkier functions, and a handy little theorem called the Fundamental Theorem of Calculus that actually lets you evaluate definite integrals, and retrieve useful information like the total number of excuses from the rate of excuses curve. Why not have a look at the article about definite integrals for more information on this useful topic?

In this article, we'll give you a brief overview of the rules of integration, as well as the antiderivatives of some common functions. We'll also work through a few examples so that you can get a better idea of how the common integrals and rules of integration are applied. If you're interested in finding out more, have a look at the articles on integration by substitution and integration by parts. Oh and, by the way, integration is sometimes viewed as the opposite of differentiation, so you might see an indefinite integral (one without limits) referred to as an antiderivative in many books.

And now for the rules that help you stitch the above antiderivatives together to come up with the integrals of some really impressive functions. This is great fun at parties! We'll start with the basics, and deal with the more complicated ones like integration by substitution and integration by parts in later articles.

RuleIntegral expressionTransformed Integral Mathematicians have a special name for the first rule and the last two rules. They refer to these properties as the linearity of the integral. Basically, all this means is that integrals behave the way you want them to when it comes to multiplication by products, sums and differences. You can pull the constant out the front of the integral, and you can split the integral up into bite sized pieces across the plus and minus signs. The property is called linearity because it's the same property that straight line functions have. If \(f(x)\) is a straight line function, then \(f(kx + y) = kf(x) + f(y)\) just like \(\displaystyle{\int kf(x) + g(x) \; dx = k \int f(x) \; dx + \int g(x) \; dx}\).

Unfortunately, products don't play quite so nicely, but then they weren't so friendly with derivatives either. Techniques such as integration by substitution and integration by parts will help us to deal with the integrals of products of functions.

Examples of applying the rules

Let's finish by using the rules to find the integrals of some functions. Don't forget that the table of common antiderivatives will be a big help here.

Example 7: using all the rules together (exploiting the linearity of the integral)

Use the sum and difference rules to split the integral into three parts:

What about all those constants?

You'll have noticed that we've added a constant to the end of each integral we've calculated. If you've done integration at school, your teacher will have insisted that you add constants to indefinite integrals. For each indefinite integral, we've found a family of functions that could be differentiated to give the integrand (the thing we're integrating). The effect of different values of the constant is to move the graph of the function (and all its values) up and down the \(xy\)-plane. Sometimes a problem will give you a condition that the antiderivative must satisfy, such as \(F(0) = 0\). You can plug this condition into the formula for the anti-derivative to work out what the constant is.