Differential Equations are equations involving a function and one or more of its derivatives.

For example, the differential equation below involves the function \(y\) and its first derivative \(\dfrac{dy}{dx}\). 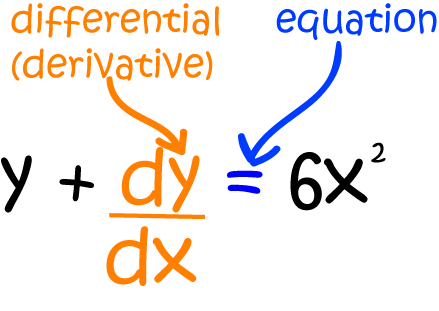 Solving differential functions involves finding a single function, or a collection of functions that satisfy the equation.

Not all differential equations can be solved, but there are a number of tricks that can be used to solve equations of certain types.

Why does anyone care about differential equations? 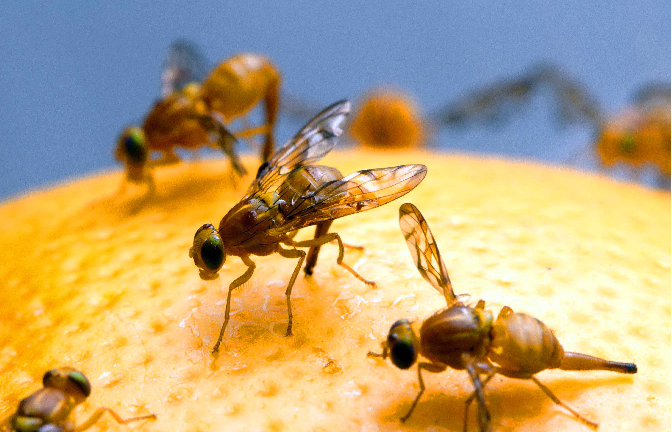 You've probably encountered fruit flies before. They're the pesky little things that seem to materialise out of thin air and buzz around the stoned fruit in the summer. Biologists are interested in fruit flies because they breed quickly and easily, and are useful for exploring the transmission of genetic traits.

Now, I need a few initial values for my model. There seem to be a lot of fruit flies, and they seem to reproduce really rapidly, so let's say: Then, the rate of change of my fruit fly population is \(\dfrac{dF}{dt} = 1,000 \times 15 = 15,000 \text{ new fruit flies per day}\). That seems about right, doesn't it? The pesky little things are everywhere!

When compound interest is applied, the invested (or borrowed) money acts a bit like our fruit flies. You need to invest money to get money, and the more money you have, the more money you end up with. In compound interest, the initial amount of money invested earns interest, but so does the interest on the investment. This interest is calculated after a given time period such as a month, a quarter or a day and added to the original amount.

You may have seen formulae for compound interest in the sequences and series section of your maths textbook. These are the sorts of formulae you get when the interest is added to the original investment monthly or yearly, but when it is continuously calculated and compounded, you need a differential equation to model the equation.

It's time to come up with some parameters for the compound interest model. We need:

Just like the fruit flies, the bigger the amount invested, the more interest it earns. We can come up with the following differential equation for the growth of investments whose interest is continually compounded:
\(\dfrac{dP}{dt} = rP.\)
If you think you've seen this before, you're right. It looks just like the equation we came up with for the fruit flies. Mathematics can't tell money and fruit flies apart! That's because mathematics is only interested in the rates of change of these two things, and not in their physical characteristics.

For now, you just need to know that this equation has the following solution:

The Verhulst Equation and the Carrying Capacity of Environments

Back to Our Fruit Flies

Our original model for the rate of change of the fruit fly population wasn't quite realistic enough because it failed to take into account the fact that a given environment (like my fruit bowl) only has enough food in it to support a certain population. This maximum population that an environment can support is called the carrying capacity of the environment.

A Belgian mathematician, Pierre Francois Verhulst, figured this out in 1838, and his work was later modified by American scientists Raymond Pearl and Lowell Reed to produce the Verhulst equation: 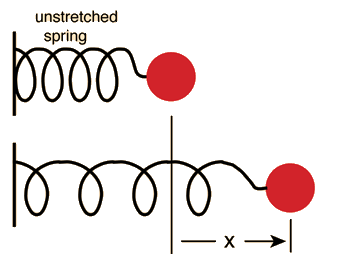 Have you ever played with springs in the science lab at school? The English physicist, Robert Hooke had lots of fun with springs back in around 1660. He noticed that the force required to stretch a spring through a distance of \(x\) units from its equilibrium (resting) position was equal to some constant \(k\) times the distance the spring was extended. In other words, he formulated Hooke's law:

There are a number of steps that we need to go through before we can solve a differential equation. That is, of course, if it is possible to solve the equation. The first is to classify the equation. This is necessary so that we can identify the appropriate technique for solving the equation, if one exists.

This is the first thing to check:

We're only interested in ordinary differential equations in this article.

The order is the next most important thing to check. It is the highest derivative (first, second, third,...) involved in the equation. The above equation includes a second derivative, so it has order \(2\).

The degree is also important. It's the highest power of the highest derivative involved in the equation. In the above example, the degree is \(4\) - there's a term in \(\left(\dfrac{d^2y}{dx^2}\right)^4\).

There are many different types of differential equations, but we shall focus on three main types:

Have a look at the articles on these three types of ordinary differential equations to learn how to solve them.