This methodology used to develop and refine an organization's software development process. The model describes a five-level evolutionary path of increasingly organized and systematically more mature processes. CMM was developed and is promoted by the Software Engineering Institute, a research and development center sponsored by the U.S. Department of Defense .SEI was founded in 1984 to address software engineering issues and, in a broad sense, to advance software engineering methodologies. More specifically SEI was established acquiring, to optimize the process of developing, and maintaining heavily software-reliant systems for the DoD. Because the processes involved are equally applicable to the software industry as a whole, SEI advocates industry-wide adoption of the CMM.

A type of test execution tools gets started by capturing or recordings manual tests hence they are also known as ‘capture/playback’ tools, ‘capture/replay’ tools or ‘record/playback’ tools. It is similar as recording a televisions programs and playing it back. The basic advantages of programmable scripting is that tests can repeat actions  for different data values they can take different routes depending on the outcomes of  test and they can be called from other scripts giving some structure to the set of tests.

Cause-Effect Graph graphically shows the connections between a given outcome and all issues that manipulate the outcomes. It is also known as Ishikawa diagrams because of the way it looks invented by Kaoru Ishikawa or fish bone diagram. It is generally use hardware testing’s but now adapted to software testing’s usually tests external behaviors of a systems. 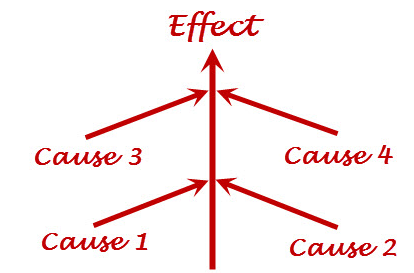 It is a testing technique that logically relates Causes (inputs) to Effects (outputs) to produce test cases. A “Cause” stands for separate input conditions that fetches about an internal changes in the systems. An “Effect” represents an output conditions a system transformations or state resulting from combinations of causes.

Code Inspections is disciplined engineering practice for correcting and detecting defects in software artifacts and preventing their leakage into field of operations.

The goals of inspection are:

Code review is a software developments process in which the peer reviewers, authors of code and perhaps quality assurance testers get together to review code. Findings and correcting errors at these stages is relatively inexpensive and tends to reduce the more locating, expensive process of handling and fixing bugs during later stages of development or after programs are delivered to users.

Reviewers read the code line by line to check for:

A formal testing techniques where source code is traced by a groups with a small set of test cases while the state of programs variables is manually checked  to analyze the programmer's logic and assumptions.

The goals of a walkthrough:

The principle of structural code based testing is to have each and every statement in the program executed at least once during the test. Code-based testing consists of Dynamic Testing, Cyclomatic Complexity to test whether complexity of code is manageable, and Static Testing. 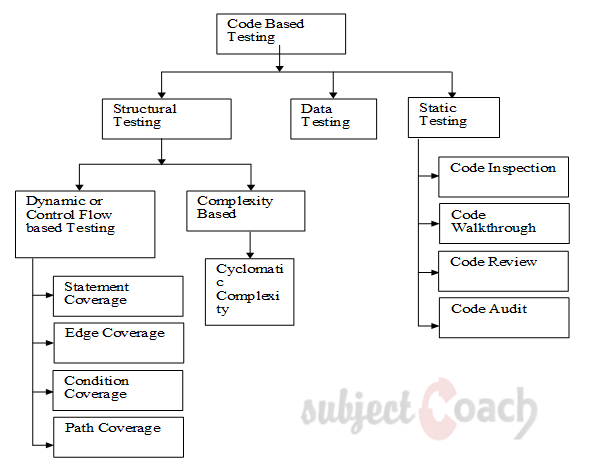 Code driven test automation is a key feature of agile software development, where it is known as Test-driven development (TDD). Proponents argue that it produces software’s that is both more reliable and less costly than code that is tested by manual explorations. It is considered reliable because code coverage is more and better and because it is run constantly during developments rather than once at the end of waterfall development cycles.

Comparison testing is a type of testing, where testers compare a software product’s strengths and weaknesses with other software that are currently available in the market. Comparison test is a very good indicator of how competitive and useful the software product will be to the end users soon after its commercial release.

It is a testing’s used to ensure compatibility of the application/website /system built with various other objects such as hardware platforms, other web browsers, operating systems etc. This type of testing’s helps find out how well a system performs in a particular environments that includes network, hardware, operating system and other software etc.

Compliance testing verifies that the application was developed in accordance with information technology standards, procedures, and guidelines. The methodologies are used to increase the probability of success, to enable the transfer of people in and out of the project with minimal cost, and to increase the maintainability of the application system.

Concurrency Testing is used to know the effects of Code Modules, accessing the Applications or Databases by different users at the same times. It helps identifying and measuring the problems in Response times, levels of locking and deadlocking in applications.

Vugen (Virtual User Generator) used to add number of concurrent users and how the users need to be added like Spike Stepped or Gradual Rampup.

Condition coverage is about testing that any operands which are part of the if expression can be evaluated to both true and false without issues.

Configuration testing is the process of testing a system under development on machines which have various combinations of hardware and software.

It type testing to determine whether products or systems meets some specified standards that has been developed for interoperability or efficiency.

Conformances testing often performed by external organizations this is sometimes the standards body to give greater guarantees of compliance.

Context-driven testing is a model for developing and debugging computer software that takes into account the ways in which the programs will be used or are expected to be used in the real world. In order to successfully conduct this type of testing, software developers must identify the intended market and evaluate the environments in which people are likely to employ the product.

Testing of procedures or programs used to convert data’s from existing systems for use replacement systems.

Cyclomatic complexity is a numbers used to express the complexities of source. It is calculated based on numbers of different possible paths through source codes. A low cyclomatic complexity’s is one factor to improve maintainability, readability and testability of a code.

This tutorial was written, keeping in mind to teach students about common terms used in Software testing, This is part 1 of the series, Covering Alphabets A-H,