What is Eclipse IDE?

Eclipse IDE is composed of plug-ins where it is designed to be extensible for additional pilu-ins.Eclipse is mainly used to develop integrated development environments, client applications and other tools.

The Eclipse foundation releases every year, since from 2006, the Eclipse Platform and other plug-ins in June.

To Downloading the latest version of Eclipse, follow the link http://www.eclipse.org/downloads/ 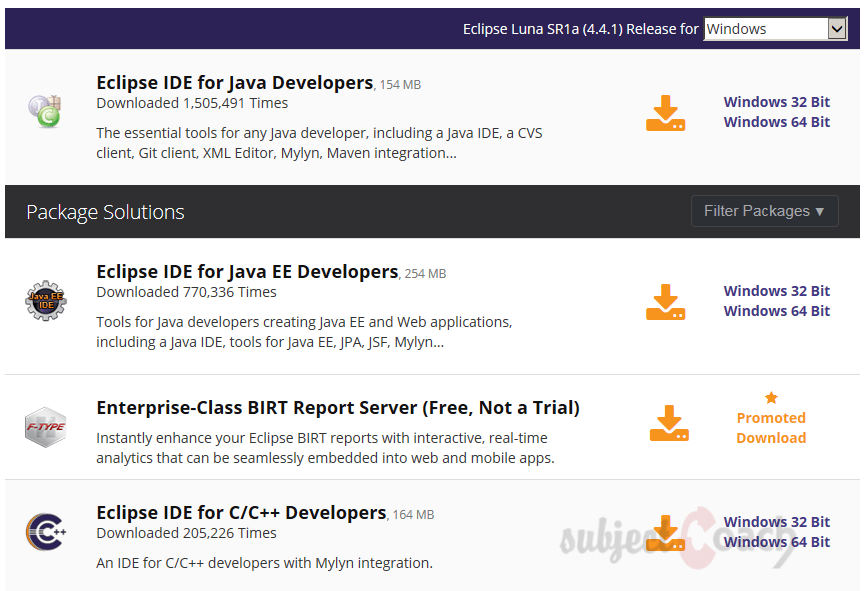 We can select operating system for specific eclipse download by selecting option in drop down box in the right corner of the download page. The options like Windows, Linux and Mac.

No installation is required for eclipse. The downloaded eclipse is packaged as a zip file,we need to extract the zip file and open the eclipse folder you may find as shown below.

To launch eclipse, double-click on eclipse.exe which is highlghted in above screenshot.

Select a "workspace" (a folder) and click on ok. We will talk about workstapaces a bit later in this tutorial too.

A folder .metdata is automatically is created in empty folder given in workspace.

If user select the check box: "Use this as the default and do not ask again", then this dialog box will not pop up again.

This guide is focused on people who want to get started with Eclipse IDE. This guide has several chapters as shown below

Please forward your feedback on corrections or if you think a section can be improved.

Students looking for a quick introduction to Eclipse IDE